Below are pictures of two tributes to Rick – the kinds of tributes that would have touched Rick deeply, for they come from soldiers serving in harm’s way.

We got these photos in the following email from Brandi.

Hi There –
I’m supporting a soldier who is currently serving in Farah, Afghanistan. He recently sent me some pictures of the base he is at. Someone (no one knows who anymore) painted some murals and the outside of the restrooms. I thought if you didn’t know about this one in particular, you might like it.
Brandi

It was a great honor to meet MSG Goodrow at Ft. Benning this March on the occassion of Rick’s statue being brought to the new National Infantry Museum in preparation for the official opening in June. MSG Goodrow has recently returned from his deployment at FOB Rescorla in Afghanistan.

This photo was taken by Capt. Mark A. Kiehle, USMC on Nov 10, 2004 during the battle for Fallujah just prior to his battery sending the 155mm round down range in support of Marine infantry (units of 1 BN, 8th Marines??) during the fighting.

Thanks to Jerry Tiarsmith for sending these photos.

The ”Rescorla Memorial Round” headed downrange

On March 25, 2009, Rick was awarded the Above & Beyond Citizen Medal – the most prestigious civilian award in America. Every year, on National Medal of Honor Day, three United States citizens are awarded the Above & Beyond Citizen Honor. They receive this award from a group of Americans whose actions have defined the word courage – the fewer than 100 living members of the Congressional Medal of Honor Society. Rick’s children, Kim and Trevor, accepted this honor at a ceremony held in the shadow of the Tomb of the Unknowns at Arlington Cemetery. Video of the ceremony is on YouTube:

Last night in New York City, I had the great honor of awarding the DHS Distinguished Public Service Medal to Rick Rescorla, a hero of 9/11 who gave his life helping his colleagues safely evacuate the World Trade Center. 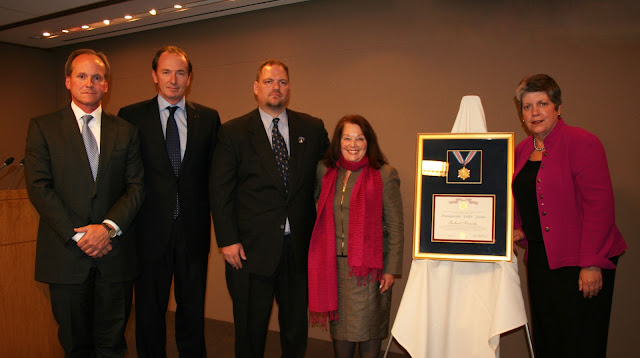 Rick’s story is one that continues to inspire many of us at DHS and across the homeland security enterprise. It also serves as a model of the importance of individual, business, and community preparedness and resilience, and the role that each of us plays in meeting our shared responsibility for security.

Rick served as head of security for Morgan Stanley and its more than 2,700 employees who worked in the World Trade Center. He was present during both the 1993 and 2001 terrorist attacks, and consistently held exercises and drills to ensure that his fellow employees knew what to do if there was an emergency.

Rick believed, as we do at DHS, that in an emergency, the public is not a liability to be protected, but an asset to be engaged. Rick expected his fellow employees to take preparedness seriously and challenged them to be personally responsible for their own safety.

Because of his tireless efforts, nearly every Morgan Stanley employee safely evacuated the South Tower on 9/11. And while Rick could have joined them, he continued to help others evacuate the building and ultimately gave his life. Rick’s wife Susan and his son Trevor accepted the award on his behalf.

In addition to awarding Rick the Distinguished Public Service Medal, I also announced the creation of a new award inspired by his legacy: the National Resilience Award. The National Resilience Award is DHS’s first national award on resilience. It will be given to individuals, organizations, or communities that have shown leadership in building resilience in their communities. It will also recognize superior leadership and innovation in helping to build a national culture of resilience, with a focus on effective preparation, response, and recovery in the face of disasters.

Rick Rescorla’s story is one that has inspired so many, and provides a powerful message to us all: in the preparedness of each of us, we can secure the nation for all of us.

During the commemoration of the tenth anniversary of the 9/11 attacks, Homeland Security Secretary Janet Napolitano honored the memory of Richard “Rick” Rescorla by presenting the DHS Distinguished Public Service Medal to Mr. Rescorla’s widowat a ceremony in New York City.On September 11, 2001, Rescorla was Vice President of Security for Morgan Stanley at their Headquarters in the World Trade Center. He personally led a massive evacuation of Morgan Stanley’s 2,700 employees, and all but six of Morgan Stanley’s workers in the South Tower survived. Richard Rescorla was one of those killed and was last seen walking back up the stairs to rescue more people.

At the award ceremony, Secretary Napolitano said “Since the 9/11 attacks, we have seen exceptional models of resilience all around us. By honoring Richard Rescorla with the Distinguished Public Service medal, we remember his heroism and commitment to the preparedness of the thousands of employees under his watch.”

On September 21, 2011, Secretary Napolitano announced that DHS would create a first-ever national award inspired by the actions and resilience of Rick Rescorla.

The Rick Rescorla National Award for Resilience is the Department of Homeland Security’s (DHS) first national resilience award for superior leadership and innovation by a non-governmental individual or organization who exemplifies the qualities and achievements of Rick Rescorla, emphasizing leadership in effective preparation, response, and recovery in the face of disasters.

The Rick Rescorla National Award for Resilience will be awarded for the first time starting September 2012.

How to Nominate for the Award

Eligible candidates may be nominated for the Rick Rescorla National Award for Resilience during the nomination period that begins on April 1, 2012 at 12:00 a.m. and closes on May 15, 2012 at 11:59 p.m. All nominations must be submitted by email to the following DHS email address: rescorlaaward@hq.dhs.gov.

Nomination forms (DOC, 4 pages) can be found on the public DHS web site.

The details of the award presentation will be determined by the Secretary. The award will be presented September 2012.

Retired Army Capt. Daniel J. Hill, the best friend of retired U.S. Army Col. Cyril "Rick" Rescorla, takes a photo of the plaque dedicated to his friend during Veterans Ceremony at the Mt. Soledad Veterans Memorial in La Jolla, Saturday afternoon. Rescorla is credited with helping save lives of 2,700 Morgan Stanley employees where he worked on Sept. 11, 2001, when the World Trade Center towers were destroyed by terrorists. He died in the attacks. — Howard Lipin